We had a wonderful opportunity to dedicate a new named space in the Northeast Library for Barbara and Fred Guptill. The Guptill’s will forever be remembered as two library lovers who used the gift of reading to change the lives of those around them. Thank you Guptill family! 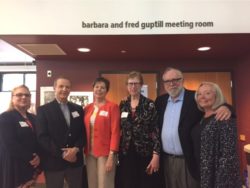 Fred and Barbara Guptill loved books. Their generous bequest to the Seattle Public Library was the last act in rich careers that centered on the role of libraries in empowering a literate populace.

Fred Guptill was born on July 14, 1930 in Seattle, as an only child of Fred Linden Guptill and Mildred Louise Carpenter Guptill. He was raised in Seattle, graduating from Lincoln High School and the University of Washington where he received his Master of Arts degree in History. He did a stint in the Navy and spent his career as a teacher and librarian for Seattle Public Schools. Fred loved to play bridge and was a master of the art. He also loved chess; one of his fondest memories was playing chess with John Wayne on one of the actor’s visits to Seattle. Fred also enjoyed traveling, history and art. Fred died on December 5, 2013.

Barbara Jane Guptill was born in Bonners Ferry, Idaho on May 30, 1931 to Lee and Enid Williams. She was the youngest of five children. She graduated from the College of Idaho in 1952. Barbara moved to Seattle to attend the University of Washington, where she received her Master of Library and Information Sciences degree. She began working for the Seattle Public Library system in 1955. During her long career, she headed the adult-education department and then the Government Research Assistance Library before she became the director of downtown library services before her retirement in 1991. Barbara remained engaged in Seattle affairs post retirement, serving as Co-President of the League of Women Voters. Barbara died on March 31, 2003.

Fred and Barbara were married on Sept. 5, 1955. Fittingly, they met in the stacks of Suzzallo Library at the University of Washington where they learned of their shared love for books and each other.