The grants will fund a wide variety of programs that support the community above-and-beyond what public funding provides. Highlights of the 2018 grants include:

“The board and staff of the Library Foundation express our heartfelt appreciation to the 6,000 donors who make these programs possible for our neighbors,” said Grace Nordhoff, board president for 2018 and 2019.

The Foundation relies on private contributions from individuals, corporations, and organizations to support these innovative programs.

Jeff Guddat, who has served as The Seattle Public Library Foundation’s Chief Financial Officer since 2010, was selected as the Nonprofit CFO of the Year by the Puget Sound Business Journal.

Guddat was nominated by the Foundation’s board treasurer, Irene Yamamoto, who praised Guddat’s contribution to the organization’s success.

“Jeff combines a strong passion for our mission with the skills of a top-notch CFO,” said Yamamoto. “The Finance Committee enjoys working with Jeff, and it gives us tremendous confidence to know that our donor investments and the overall financial management of the organization are under such great care.”

Despite a conservative investment approach, the Foundation’s investments returned 16.2 percent in 2017. Guddat also leads the organization’s operations, with oversight over human resources, IT, and administration.

Guddat joined the Foundation following a successful career in the private sector with financial companies including Russell Investments and BNY Mellon. He has served in a variety of roles including division controller, investment analyst, and auditor.

Guddat will be honored on March 15, 2018 at the Grand Hyatt Seattle. 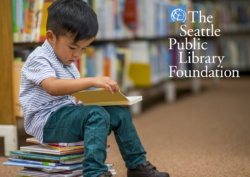 Struggling to find the perfect gift for that hard-to-shop-for friend or relative? Consider honoring that person with a gift to The Seattle Public Library Foundation.

You simply make a donation to the Library, in any amount, and designate your gift for a friend or loved one. We’ll send them a lovely card and include a special note from you! (You can also keep your name and/or gift amount a secret if you prefer.)

A tribute gift is a great way to share your love for the Library while providing a meaningful gift for someone important to you! 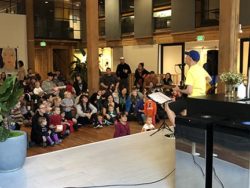 Our thanks to Babyrific — an app for keeping track of places and activities for kids — for hosting Celebration of Giving with Caspar Babypants on Saturday! More than 150 children and parents attended. We checked out more than 40 library books, issued 12 new library cards, and collected wonderful financial gifts to support the Library. Kids also donated books for the Immigrant and Refugee Center and collected two bins of coats for children at Mary’s Place. What a great day…thank you Babyrific!

In 2018, The Seattle Public Library plans a major renovation on the Lake City Branch, expanding the amount of public space to meet the needs of the neighborhood.

Join The Seattle Public Library Foundation for a special briefing to learn about the project and how you can be part of the community campaign to renovate the library. Supporters will learn about a special gift matching opportunity and the chance to have your name featured on the in-branch donor wall.

A huge thanks to all of our amazing supporters who stepped up for #GivingTuesday. The numbers are in — we doubled the amount raised last year and increased the number of donors by 100! That doubles the impact we can have on children, teens, and families who rely on the Library’s services to help them learn, grow, and satisfy their intellectual curiosity. A special note of thanks to our anonymous match sponsor…you know who you are! Thanks to ALL for your generous spirit!

Thanks to a generous donor, your gift to The Seattle Public Library Foundation can be doubled on #GivingTuesday! This is a perfect opportunity to “pay it forward” and share your love for books and reading with your Seattle neighbors.

Make your gift on #GivingTuesday! Matching funds will double the impact of your gift, so give early, and help us reach our $50,000 challenge fund. Click here to give! 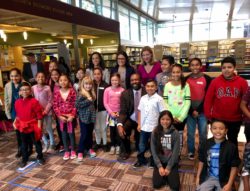 Thank you Google! Did you know that Google has contributed a total of $458,200 grants to the Library for technology and STEM programming?

The Library’s finch program is made possible through a $58,200 grant from Google, The Library currently has 100 finches that it uses in a curriculum that introduces students to computer coding and develops skills in problem-solving and collaboration. This is one of several of the Library’s partnerships with Google to increase patron access to technology and digital literacy.

Google and the Library initially worked together to launch the highly successful Wi-Fi Hotspot program in 2015. Google has contributed more than $300,000 to the Library’s Wi-Fi Hotspot lending program. A Library survey revealed that 31 percent of Library patrons who check out the hotspots have no internet at home and 31 percent have incomes under $20,000 a year. The 835 hotspots have circulated over 18,000 times since the lending program began.

Google also has gifted $75,000 to the Library to put laptops and tablets in nine branches. Patrons can borrow them for use in the branch for 90 minutes a day. The eight laptops and two tablets will be loaded with the latest software, including Windows 10 and educational resources.

Thank you Google for your incredible support! 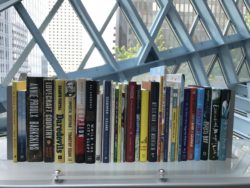 Congratulations to the finalists in the 2017 Washington State Book Awards!

Thirty-eight authors and illustrators who make their home in our state are being honored for books that were published in 2016.  The 2017 Washington State Book Awards celebration is Saturday, October 14, at 7 p.m. at the Central Library in downtown Seattle. The Foundation will host an after party for all who attend on Level 3 of the Central Library.

Come toast the winners and finalists!

This October, the Library visits your favorite bars and pubs for Booktoberfest, our annual celebration of books, beer and good cheer. Join us in venues across the city for bookish happy hours, librarian-hosted trivia nights, spooky stories in bars and libraries, Karaoke, Books a la Carte and Literary Fortune Telling! Your gifts to the Foundation help bring these Library programs out into the community!